The Horror House is not something new I’ve been doing, it has been going around for 6 years now, in the same location of my house. This year is the 7th event of the Horror House with the theme of Asylum. The Horror House is the event that happens each Halloween, and now it still survives at its 7th Halloween. These Halloween events are run by 2 friends, both the founders of it, me, Powee Celdran and Jake Consing. It is an exciting fun event that happens annually though the making though is stressful but still fun after all. The whole thing began in 2008, then went on through the years having different themes such as mythical creatures and monsters from the Philippines (2009) and from around the world (2010), haunted hotel (2011), and your worst nightmare with scares from both the Medieval and modern world (2012-13), this year it is Asylum, with scars all on insanity. The past horror House have brought successful scares, this year, the scares shall be much more frightening bringing more nightmares!! The Horror House this year has the Asylum set-up, with less dividers but 2 areas, the first the entryway and the exit, the other is the main hall itself. Around the walls are webs, curtains, and insane items.

The set-up began only a few days ago, and by Halloween day, its finished, although being stressful in setting-up, the set turned out to be well. It has one divider at the middle, then a hall going around it. The hall is separated with curtains, on the other side is the entryway and exit. The curtains are used as dividers.

In the making of the Horror House, the curtains go first and making the place dark. Next is the positioning of props inside. Afterall, it turns out that the things inside have been positioned well having masks ad creepy images hanging, fake candles glowing, a few tables with stuff of insanity as well.

The theme is Asylum based on insanity, making the props be based on Asylum. Part of this are creepy vintage images of people of the asylum placed on the table and mirror. There is also an alchemy table below with glowing candles and experiment items of the Asylum. These experiments on the alchemy table, were the ones that drove the people here insane, as part of the story here.

On the corners are chairs with scares behind them, the rest of the room has a few tables also with stuff on them. The props include fake hands, a chopped-off head, a lava lamp, and fake candles. Masks are hanging around the room too, sme props are hanging from webs and from above. 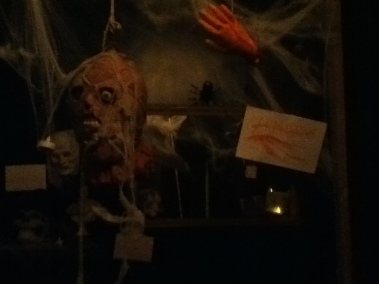 Some of the items inside are based on some stories of insanity or creepy stuff. One of the minor themes inside are based on the insane death of Germanicus, a Roman general and hero from the Julio-Claudian family, brother of Emperor Claudius and father of Caligula. His death was caused by seeing all sorts of crazy items that frightened him to death such as a chopped-off head, webs, his name on bloody messages and skulls that appeared on his room, these items are shown are shown here.

Part of the set is also props related to the play Hamlet with flowers and skulls lying around. As part of the asylum theme, there are bloody notes left around with crazy quotes based on insanity. Overall, the set looks and well though the scares and scarers make it complete. Part of the scares will be creepy music playing as people will come in for the scares. This should be a great success for the Horror House and should bring your most insane nightmares!! Happy Halloween!! to be continued…

It turned out to do successfully as the event happened for more than 2 hours and the team did well. It did not turn out exactly how it was supposed to be but was still a fun experience with a complete cast, a better set-up, and the team doing well (though I wasn’t there the whole time the event happened). The ones who made the ultimate Horror House happen included those from the past and those from this year’s only; myself (the chairman and Horror House team leader), Jake Consing (scares and set director), Sandro Yguico (sound-system), Santiago Roxas (organizer and producer), Villa de Asis (set organizer) and Renzo, Vince, Bobby (the scarers)

Of course we were prepared for this and the team did well overall, better of we had fin and scares! The making was a great unforgettable experience altogether.