The two of my best dramas, both classics, and both British are Hamlet by William Shakespeare and I, Claudius by Robert Graves, both are things I can never be tired of. First of all, Hamlet is more of a tragedy and is one of the most famous tragedies ever, actually turns out to be the greatest of Shakespeare’s plays and for me it is the best and there only one of his plays which I like the most. Hamlet though has a fictional setting but related to Renaissance times, which was the same time as Shakespeare (15-1600’s) and is set in Denmark; it is best known as a revenge story of prince Hamlet who has a task of avenging his father no matter how hard it is as he has to kill his evil uncle, Claudius though his task ends making him go mad. I, Claudius on the other hand is another story but also a British classic but set in the Roman times during the time of the Julio-Claudian emperors (27BC-68AD) but mostly focuses on the life story of Emperor Claudius I and his unexpected story of becoming emperor, it is also called the epic that never was. It may be boring though but it is very interesting if you know it better; what I like about I, Claudius is just the tv series itself from 1976, it may have a boring style but it is full of energy from the actors and the story is very epic yet bloody and full of plots. The boring part though is that it is set in Roman times, which I find overrated but knowing about the inner parts of the Roman world, it seems fascinating. What I like most about it is the actors and their roles, both I, Claudius and the adaptations of Hamlet share the same actors if you noticed. 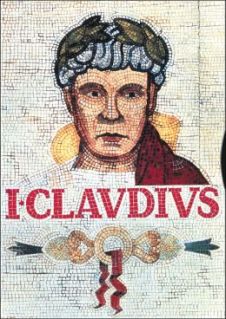 I. the backgrounds (I, Claudius): The epic of I, Claudius is based on real history but instead of the commonly known things about imperial Rome, it focuses on more detailed things of each members of the Julio-Claudian family, how they were like together. It was originally a book from the 1930’s written by Robert Graves and was made into film as a TV series in 1976, which was partly written by the author of it. The story focuses on the protagonist Claudius (full name Tiberius Claudius Nero Caesar Germanicus) who was a member of the family but writes his family’s history as he survived the plots and disasters that happened to the members of his generation and made it out to old age becoming emperor of Rome (41-64AD). There were other important members involved in his life story, some succeeded, some failed though most were part of the powerful and bloody business of the empire such as Emperor Augustus Caesar and his grandmother Livia Augusta, also his uncle Emperor Tiberius, his nephew Emperor Caligula, his mother Antonia Minor, his brother the general Germanicus, his father general Drusus, and others outside the family such as the ambitious cunning agent Lucius Sejanus and Claudius’ friends. There’s quite a lot more to tell in this story as it is full of everything you want to know about the imperial family.

II. Hamlet- summary and background: The story of Hamlet is a world-famous and celebrated drama and was made into film several times and has the famous lines of “to be or not to be, that is the question”, “what a piece of work is man”, “alas poor Yorick” . It is about prince Hamlet, the prince of Denmark who’s father, King Hamlet has been poisoned and killed by his brother, Hamlet’s uncle who’s name is also Claudius. Claudius becomes king and also marries Hamlet’s mother Gertrude in which Hamlet is not satisfied although his father appears to him as ghost telling him to do his task an avenge his death which means killing Claudius. Hamlet’s overall fully hated his greedy uncle and often kept on warning his mother about him, at the same time he is helped by his trusted friend Horatio and also is in love with Ophelia but this drives both him and her mad. At one point Hamlet’s tests the king’s conscience and nearly kills him but ends up arguing with his mother and kills the king’s advisor Polonius. This action made Hamlet be sent away to England while back in Denmark, Polonius’ son Laertes seeks revenge on Claudius for his father’s death though it was actually Hamlet that did it, the more he hates Hamlet as he finds his sister Ophelia going insane because of him. Claudius makes an agreement that both Laertes and Hamlet will settle their vengeances by duelling each other when Hamlet comes back. In the duel, the king still tricks Hamlet by making the cup poisoned since if he was a round he will drink though Hamlet knew the trick so he refused it but his mother drank it and died from it. Laertes hits Hamlet with his poisoned sword and Hamlet does the same with Laertes leading to his death, after this Hamlet knowing the poison from the sword will kill him strikes Claudius and gives him the poison killing him bringing his father justice. Shortly after out of the absorbed poison and exhaustion, Hamlet makes peace with Laertes and falls on his friend  Horatio soon afterwards he dies as an honourable hero. At the same time, he surrendered Denmark to the rule of Fortinbras of Norway who would be a better king and he gives Hamlet a soldier’s funeral recognising him as hero throughout history.

III. Comparisons: The stories of Hamlet and I, Claudius are not far apart and have some similarities especially the actors who played the roles in I, Claudius may have played roles in Hamlet a few times. The settings of the stories may be different as I, Claudius is set in Roman times and Hamlet is set probably in the 1500’s although the films show Hamlet in different times either Medieval, Renaissance, or modern. Of course both stories have a character named Claudius the difference there is that the Claudius in I, Claudius is the main protagonist and hero who at the beginning did not do great but foolish but turned out to be the surviving one at the end as he use his foolishness to help survive becoming something powerful and ruthless at the end. On the other hand, the Claudius from Hamlet was always jealous of his brother the king and poisoned him to make himself be king, the interesting back story here is that Hamlet’s Claudius was named after the same Emperor Claudius I who in Shakespeare’s time was thought to be an evil power-hungry emperor though the author of I, Claudius Robert Graves disproved the fact and changed Claudius’ image. One of the similarities here when comes to the film versions is the actors, in particular Derek Jacobi starred in the TV series of I, Claudius as Claudius while at the same time, he also did a Hamlet film where he played Hamlet and later on in the 1996 Hamlet, he played Claudius. The 1980 version of Hamlet ha 3 cast members from I, Claudius in 1976 including Derek Jacobi as Hamlet, David Robb (Germanicus in I, Claudius) as Laertes, and Patrick Stewart (Sejanus in I, Claudius) as Claudius. For me the 1996 movie of Hamlet was the best very extensive and not just plain but with so much excitement an emotion; it was directed by Kenneth Branagh who starred as Hamlet, Derek Jacobi was here too as Claudius and one of my all-time best English actors, Brian Blessed (Augustus in I, Claudius) did the role of the ghost of King Hamlet. Both stories too have the same type of scheming plots and revenge scenes making them overall great works of literature.